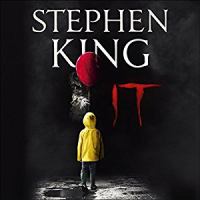 List - Multcolib My Librarian Alicia T: 10 horror audiobooks that are sure to give you chills

The story of a small town haunted by an evil shape-shifting entity and the seven children who face this nameless horror.

Also available as a downloadable audiobook.

So you say you like clowns? A promise made as teens reunites seven adults who thought they had disposed of a certain evil in their youth. Although this one is a lengthy read, I flew through the pages. (Tamara's pick)

It's a journey. This work is well built from his other works. It's like King's universe, you can dig it. No complaints here. Finished in 20 days

It is one of the best horror blood I have ever read. Yes, the are lots of sexual scenes, and yes, they use the n-word a whole lot, mostly by the bowers family and the army, but I think it is a very good book

I felt cheated by the ending with Bill and Audra. I actually felt leaving this unresolved would have been perfectly fine. Overall, a good read and enjoyable

Started out great but then dragged way too much. Child gang bang part was totally unnecessary and creepy. HATED the ending

It was a good supernatural romp for most of the time but I really hate the ending.

This is a monster book about a dark being that haunts the nightmares of children. Known only as ‘It’ by the few who know about It, this dark alien brings the fears of children to life before consuming their terror and ending their lives.

Stephen King shows off his mastery of horror in this long, detailed story about seven children who faced It, wounded It, scared It, and drove It away. Twenty-seven years layer, It calls them back, wanting revenge for what they did to It, but has It made a fatal error in calling back the only ones who ever hurt It?

Wavering between the past and present lives of the grown-up children, this book is a masterpiece of storytelling. With a lot of detail, this book is not for the faint of heart. Over a thousand pages of rich prose, some of it controversial, and once you read It, you will wonder every once in a while if It is out there in your town.

Recommended for adults. No, seriously, you should be over eighteen. Consider this your warning of adult material.

Stephen King is a very talented writer, and this book- like most of his others- is really creative, entertaining and very well written. It is really fun to read because it is scary, but also funny and serious. As can be expected from a book with over 1000 pages, there are some boring, slow moving parts throughout the story, and certain things seem to drag on for a very long time. Most of the characters are likeable, which always makes a story easier to read, and there are a lot of plot twists and surprises that have you wanting to read more and more. I enjoyed this book for the most part and I think Stephen King’s books are always fun to read. 8/10 stars
- @Bookworm123 of the Teen Review Board of the Hamilton Public Library

ABSOLUTELY AMAZING!! Characters where incredibly real feelings and the end of the book came with a surprise! Highly recommend.

My first read of "IT" was in 1986. I went and bought the book the day it was available @ Tower Books in Seattle. To this day, it's my second Fav. King book.
This Stephen King tale, is still in my top 5 of Horror Books. For me, "IT" is the most audience universal & addictive tale of Mr. Kings very large Library.
"IT" speaks to childhood fears, overcoming feelings of powerlessness to change things, being brave to save those we love and the power of bonds & friendship in the face of insurmountable challenge.

blue_beetle_872 thinks this title is suitable for 2 years and over

007Gatsby thinks this title is suitable for 11 years and over

Metallicat71 thinks this title is suitable for 14 years and over

dwlueth thinks this title is suitable for 16 years and over

kristiniak thinks this title is suitable for 16 years and over

Wonderboy1506 thinks this title is suitable for 14 years and over

carl5555 thinks this title is suitable for 16 years and over

brihawkins13 thinks this title is suitable for 18 years and over

taylorwoods thinks this title is suitable for 16 years and over

Morgan804 thinks this title is suitable for 15 years and over

Sexual Content: There is a very disturbing seen where all the boys in the losers club penetrate an 11 year old girl

Frightening or Intense Scenes: Too scary!

Frightening or Intense Scenes: There is a lot of frightening and intense scenes in this book. The first scene is really frightening. If your scared of clowns already every scene with the clown in it will be frightening. There is also a scene in a restaurant that is pretty frightening.

Coarse Language: There is a lot of swear words in this book. They use the F word, The N word and lots of other swear words.

Sexual Content: Their is sexual content in this book. They talk about what they think sex is.

Frightening or Intense Scenes: Probably the scariest book ever written, all around.

Violence: This novel contains graphic depictions of the grizzly deaths of over a dozen characters, including children as young as age six.

Frightening or Intense Scenes: The main theme of this novel is the exploitation of its characters' fears by its eponymous antagonist.

"The Losers are still losing, but Stanley Uris is finally ahead!" (this is my favorite pun)

"Kids, fiction is the truth inside the lie, and the truth of this fiction is simple enough: the magic exists."
-S.K.

“We lie best when we lie to ourselves.”

It begins when *SPOILER ALERT* Bill's brother dies. From then on 7 people befriend each other and form an unbreakable bond. Bill and Eddie meet Ben, then Richie comes in with Stan, Beverley joins when Richie invites her to the movies, and finally, the circle closes when the Losers fight off Henry Bowers and his gang of bullies for Mike. They build clubhouses, play in the Barrens, and are children with each other while facing their own battles at home. Bill is bullied because he stutters, and is known as Stuttering Bill to everyone (except his friends, who know him as Big Bill). Bill is still dealing with the loss of his brother, Georgie, and he feels like his parents don't love him anymore because they blame him for Georgie's death. Eddie's mom is overprotective and he suffers with what his mom says is asthma. Ben is bullied because he is fat and he is hopelessly in love with Bev, but Ben also has an amazing mind of an architect. Richie is bullied because he is annoying and doesn't know when to shut up (Beep beep Richie), even though he is a loyal friend and can be pretty funny. Stan is the serious and practical one and he is bullied because he is Jewish (this book was written in the 80's and set in the 50's so it's pretty racist). Beverly has to deal with an abusive father and grows up her whole life in abusive relationships. Mike is the only black kid and is constantly fighting racism and the hatred of the town bully, Henry Bowers, who killed Mike's dog and is ready to move on to Mike himself. Why fighting against Henry and their own monsters, they still have to deal with the mysterious creature who is kidnapping children from Derry. The Losers encounter It multiple times, seeing the reflection of their own fears. Eddie sees a leper, Bill sees Georgie, Ben sees the mummy, Richie sees a werewolf, Stan sees the dead kids, Bev sees blood, and Mike sees the giant bird. They figure out that it's It, a force that has been kidnapping, killing, and feasting on the children of Derry for years. The Losers confront It first in the house at Neibolt Street, then in the sewers in It's lair. They make a vow that if It ever comes back, they'll all come back to Derry and face it together. Years go by, everyone moves away, and they all forget about each other and the summer of 1958. Then Mike Hanlon calls and informs them, "It's back". By then no one can remember It, their childhood in Derry, each other, or anything hat happened that summer. 6 of them show up in Derry as adults and they begin remembering together. Then they must face It again, but first they must face their own monsters. When that is done, 5 travel to It's lair again, and kill It once and for all. 4 leave the sewers, returning to Derry in ruins. Out of their original circle of 7, five survive and they all leave scarred. They leave Derry again, and forget about each other and the fact that anything ever happened.