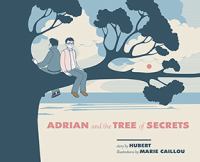 Adrian and the Tree of Secrets

Adrian isn't very happy. He lives in a small town, goes to a Catholic high school, wears glasses, and wishes he were more muscular. He's dogged by a strict mother and bullied by the kids at school. But he's also friends with a cool kid who takes him on scooter rides and whisks him up to a secret treehouse where they steal kisses. Adrian finds himself falling in love until his friend's girlfriend rats them out and sends both boys into a tailspin of embarrassment and concern.
Publisher: Vancouver : Arsenal Pulp Press, [2014]
Edition: English language edition
ISBN: 9781551525563
1551525569
9781551525570

Adrian lives in a small town, goes to a Catholic high school, wears glasses, and wishes he were more muscular. He's dogged by a strict mother and bullied by the kids at school. But he's also friends with a cool kid who takes him on scooter rides and whisks him up to a secret treehouse where they ... Read More »

Before reading this book please be aware that it contains homophobic slurs and strong themes of suicide. If you require assistance, please see our listings for mental health support services or the Gilbert Centre.

Adrian and the Tree of Secrets is a young adult graphic novel. The story is by Hubert, and the illustrations are by Marie Caillou. The book follows Adrian, a quiet boy struggling to accept himself as gay in a small catholic town. With his strict and controlling mother paired with the fears of bullying at school, Adrian tends to be pretty unhappy. To keep himself out of as much drama as possible, Adrian tries his best to fly under the radar of popularity at school, claiming the role as a nobody. This works for a little while, until he has a run-in with Jeremy, the coolest guy in school. Yet, instead of wanting Adrian out of his life, he surprisingly wants him in it. Maybe even as more than just a friend.

Overall, I enjoyed this graphic novel for the most part. I liked how it portrayed young love, high school, and exploring sexuality. For most of the book, it’s a cute story of two teens having fun and taking scooter rides, just trying to make it through high school. But then, darker subjects, such as homophobia and suicide are brought into the picture, and they aren’t handled very well. The story suggests that all LGBTQ+ relationships are doomed to end in tragedy, and although the book was published in 2013, it’s still an outdated storyline even for back then.

The artwork uses many different colour schemes, resulting in some very aesthetically pleasing pieces on every page. However, the characters constantly have an extremely uncomfortable stiffness to them when bending, walking, talking, etcetera. The illustrator obviously has their colours down, but a few anatomy classes probably wouldn’t hurt.

The book was originally released in French, and it can be pretty apparent at times that it’s been translated. For example, the title “Adrian and the Tree of Secrets” barely has anything to do with the story, but the original French title “La Ligne Droite,” roughly translating to “The Straight Line,” which might have been a better title considering the LGBTQ+ themes. At other times in the book, the text just seems odd and doesn’t flow like a real conversation. I feel like a little more time could have been spent on translation.

I would suggest this bittersweet love story to anyone over the age of 13, especially if they grew up as LGBTQ+ in an unsupportive area like Adrian. However, if homophobic slurs, suicide, and slight physical abuse are triggering for you, I would stay away from this one. In conclusion, I give this book a three out of five!

Hubert's graphic novel, "Adrian and the Tree of Secrets", is much like a typical gay-themed movie: miserable, self-loathing characters with an unhappy ending. If this book was released perhaps 15 years ago when gay teen novels were only just beginning to get popular, this might have fared better. Unfortunately, the story is derivative of the aforementioned gay films. Still, "Adrian" could still have transcended this well-worn genre, but unfortunately, the book features one dimensional stereotypes (the handsome jock, the mean girlfriend, the overbearing and religious mother) and an overly familiar plot. The drawings themselves although interesting because of the pastel colours, even seem uninspired, with panels that sometimes almost look exactly like the previous (which makes it reminiscent of a four/five-paneled comic strip rather than a graphic novel). In the synopsis, it says the book is about, "having the courage to be true to yourself." Such a bleak ending contradicts this supposed message.

I thought this had pretty nice clean artwork, even though it looks very mechanical, it works. Interesting colors. The story is kind of boring to me, I can relate to being bullied & other parts, but a lot of it is foreign to me. The sad ending was very similar to 2-3 other graphic novels I read around the same time. Strange.

I just read this book and I totally adore it! It's a story for anyone who's growing up in a family where you feel you don't fit in. We're told that our family should love us no matter what, but in this story our main character Adrian is being forced to choose between being who he really is, or denying his true feelings and falling in line with what is expected of him by his family and church. My favourite quote is by Adrian when he asks, "What's important? What you feel or what others think? Aren't you sick of lying to yourself?". Adrian's bravery to be true to himself even when the whole world seems to be against him is totally inspiring!

There are no ages for this title yet.

There are no summaries for this title yet.

There are no notices for this title yet.

There are no quotes for this title yet.