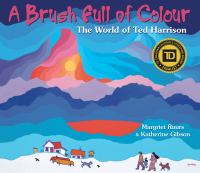 A Brush Full of Colour

The World of Ted Harrison

A review of this book, which was published in the Stratford Gazette in 2016, can be found in the "Summary" section.

The iconic paintings of Ted Harrison, with their bright, vibrant colours, have long been synonymous with Canada’s Far North.
A Brush Full of Colour is a wonderful tribute to this beloved artist. Born in northeastern England, Harrison attended art school, served in the Second World War, and later taught art in Malaysia and New Zealand.
In 1967 he noticed a newpaper ad for a teacher needed in Canada. He applied, was hired and went off with his wife and son to Wabasca, a Cree area in northern Alberta.
A few years later, the family moved to the Yukon and remained there for over twenty-five years.
Ted Harrison absolutely loved living in Canada’s north (even in the winter!). While there, he applied the bright tropical colours that he had seen in Malaysia and the South Seas to his paintings of the Canadian North. Because his art became so popular, it changed many people’s image of the North from that of a land of drabness to a land filled with bold colour.
Mr. Harrison’s art is familiar to younger readers because he illustrated a number of children’s books, such as A Northern Alphabet and O Canada.
Unfortunately, Ted Harrison died early this year in Victoria, British Columbia.
** Recommended for ages 8 years and up.

There are no ages for this title yet.

There are no notices for this title yet.

There are no quotes for this title yet.