multcolib_aliciat
Multnomah County Library
Staff-created list
Dating back to 1865, it was on June 19th when Union soldiers arrived in Galveston, Texas with news that the U.S. Civil War had ended, marking the end of slavery for African Americans in this country. Since then, June 19th or "Juneteenth" has been observed as a holiday, celebrating the end of slavery in America, and its meaning to the culturally resiliency of African Americans over the years.
By:

Juneteenth
The Story Behind the Celebration
by Cotham, Edward T. (Edward Terrel)

All copies in use Availability details Holds: 4 on 9 copies
Place hold
Add to My For Later Shelf On my shelf 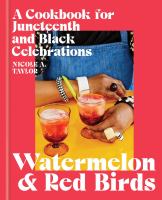 Watermelon & Red Birds
A Cookbook for Juneteenth and Black Celebrations
by Taylor, Nicole A.

On Juneteenth
by Gordon-Reed, Annette

How the Word Is Passed
A Reckoning With the History of Slavery Across America
by Smith, Clint

A Black Women's History of the United States
by Berry, Daina Ramey

The Life of Frederick Douglass
A Graphic Narrative of A Slave's Journey From Bondage to Freedom
by Walker, David

The Slave's Cause
A History of Abolition
by Sinha, Manisha

The Long Emancipation
The Demise of Slavery in the United States
by Berlin, Ira

The Problem of Slavery in the Age of Emancipation
by Davis, David Brion

Envisioning Emancipation
Black Americans and the End of Slavery
by Willis, Deborah

Freedom National
The Destruction of Slavery in the United States, 1861-1865
by Oakes, James

A Slave No More
Two Men Who Escaped to Freedom : Including Their Own Narratives of Emancipation
by Blight, David W.

Bound for the Promised Land
Harriet Tubman, Portrait of An American Hero
by Larson, Kate Clifford

Juneteenth
A Novel
by Ellison, Ralph

Narrative of Sojourner Truth
A Bondswoman of Olden Time
by Truth, Sojourner